Tuesday Tips: Don’t Be Bullied by the Course You don’t have to take the “obvious” line.

November 9, 2021 by Steve Andrews in Opinion with comments

I was playing a league round with a teammate on a course with a lot of OB and five holes that turned sharply to the right. On each of these, he pulled out his high-speed Boss to throw a forehand. The result – a par, one birdie, two bogies, and a triple, to net +4. The throws weren’t all bad; the birdie was a gorgeous forehand flex that landed within five feet of the basket. But the bogeys were risky shots where he flipped the shot OB or faded early and went into trees on the short side. On each one, he said that he had to throw the power forehand because “that’s the right shot.”

He’s probably correct — the right shot to get close is probably a power forehand. But it’s a shot he can only hit occasionally – so was that the best shot for him? In most cases, I think it would be better to throw a shot he could repeat more consistently even if it left him further from the basket. This is especially true when the penalty for missing is an OB stroke or being trapped on the short side of a dogleg.

While the best golf holes usually offer multiple ways to attack a hole, sometimes it is clear what the course designer wants you to throw. It is a long hole with a low ceiling, challenging you to throw a roller. Or it is a tight, narrow fairway to see if you can hyzerflip a fairway driver dead straight for 280 feet. It is easy to stand on the tee and feel like one of the central parts of disc golf – deciding what shot to throw – is out of your hands. There is an obvious way to get close, so you need to try that, even if it isn’t a shot you are confident you can execute.

Don’t be bullied by the course.

If your forehand isn’t a reliable weapon, then only use it when its inconsistency can’t wreck your score. Remember – the central tenet of course management is throwing your best shots as often as you can. That may mean that the best shot for you may not be the expected “right shot” for the hole.

Avoid the Near Miss

Let’s look at hole 7 on Mt. Gilead Disc Golf Course, a fun church course in Mooresville, Indiana. It is a 333-foot hole with the basket tucked to the right with OB behind it. What makes the hole hard is a mando on the right side you have to pass on the left. It is close enough to the basket that a good right-turning shot can miss the mando short and still land in the circle. 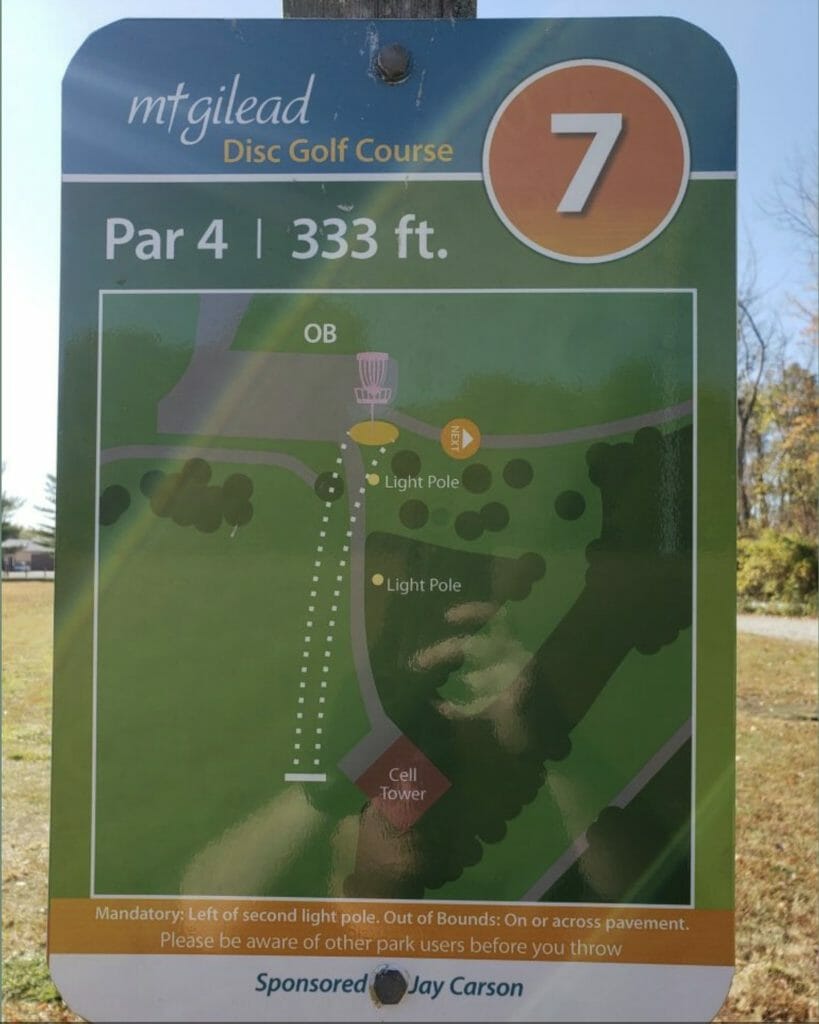 Standing on the tee, the temptation is to throw the “correct” shot. For a right-handed player that is a turnover backhand or forehand that mirrors the shape of the hole. But think about it – the worst possible place to be is short right, missing the mando and having to go back to a tough drop zone where you still have to shape the shot around the mando. From the drop zone, you still need to land your approach on a small target with OB pavement close behind. This hole, where the correct play seems so obvious, can absolutely wreck a scorecard. 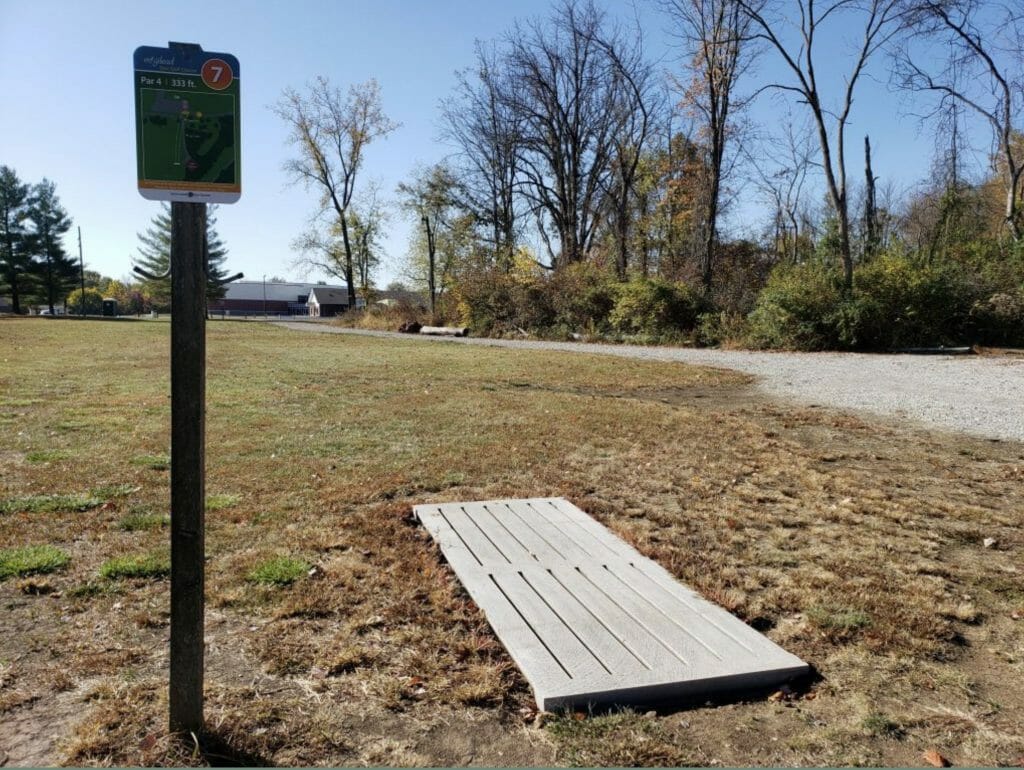 For many players, this is an absolute trap. It requires over 300+ feet of power to make it there and going long is not an option. A shot thrown with the exact right shape – but just not enough power – misses the mando. Thrown too hard, it skips long into the OB. A good but not great shot can be brutally punished. You can face catastrophe from a near miss.

Instead, imagine throwing a simple straight or right-handed hyzer shot wide left of the mando. If you have the distance, you are just short of the basket with a long putt for birdie. Yes, you are throwing against the shape of the hole and your shot may be moving away from the basket. But even if it drifts away to the left, you are looking at an easy up-and-down for par. It is hard to abandon the chance at parking a hole, but golfing is about having a plan that maximizes your score. And sometimes that requires minimizing risk.

This strategy is especially helpful on doglegs. On these types of holes, the worst miss is on the short side of the turn. So, if you aren’t sure you have the power to make it around the dogleg, then the best shot is often to work against the turn, landing on the left side of a dogleg that turns to the right. This opens up the widest angle for the next shot. It can feel counterintuitive to throw a left-turning shot on a right-turning hole, but it is about setting up your next throw.

The Road Not Taken

Examine every hole to see if there is a way to throw the shot you are most confident in.

This is the heart of a lot of Simon Lizotte’s course management. One of his huge advantages is being able to throw 400+ on a spike hyzer (and even further with a sky anhyzer). When confronted by a tight hole, he looks to throw that shot over everything, even when the chance of finding the fairway is low. The calculation is that crashing down in the trees 400 feet off the tee is better than taking the chance of hitting a tree 60 feet off the pad trying to hit a gap. This is the same calculation that has brought “Bomb and Gouge” golf to the PGA Tour, where players like Bryson DeChambeau hit it far and then scramble from the rough. Lizotte might take it too far, throwing high spikes and flex shots even when there is little danger from an easier shot, but this is basic course management. He throws his best shot even when the course wants to challenge a different part of his game.

You may not have a 400-foot spike hyzer on call, but looking for alternative routes is still a good plan. Can you throw a grenade or other shot to get past a tight gap or over a corner? Can you avoid throwing your weak forehand by playing out wide with a backhand hyzer and coming in from behind the basket? Can you throw a forehand roller down a narrow fairway?

None of the holes may be custom made for the shots you like to throw. Can you throw them anyway?

Also, be open to drastically dialing back the aggression when the risk is high. If there is a narrow gap 50 feet off the tee that could kick you into deep woods or OB, consider throwing a jump putt through the gap. If that puts you in a position to still make par, it could be a much better play than throwing a shot that makes you anxious and could lead to disaster. There may be holes that you are just not going to par at your present skill level; if there is a hole that often leads to huge blowups, feel free to play it for bogey and move on.

Many players can get focused on the obvious route to the basket and don’t consider all the dangers on a hole. The tee sign tells them a distance, they know the disc they throw that far, and that’s what they are going to throw. But it’s important to look for all the dangers on the hole and rank the worst outcomes. This process often reveals the good miss.

Let’s look at a pretty simple hole, number 14 at Mt. Gilead. It is just a straightforward 265-foot hole — thick hedges down the left, OB parking lot on the right. The basket is tucked behind the end of the hedgerow with two small guardian trees. 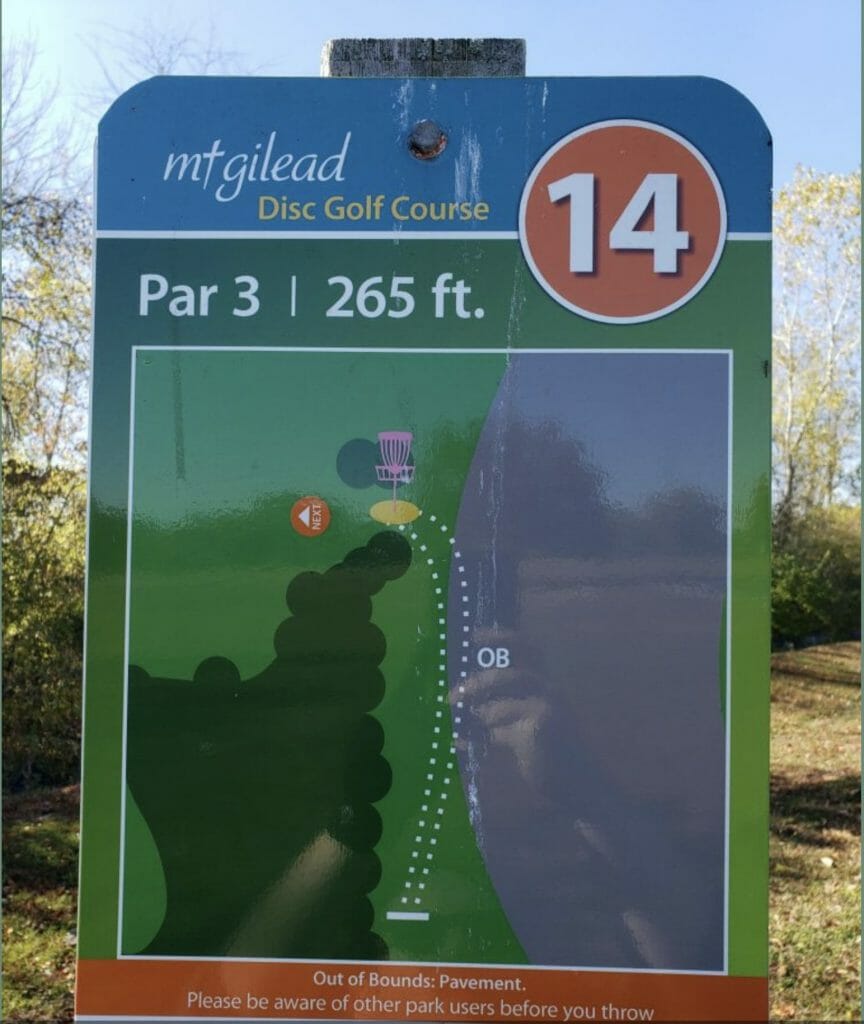 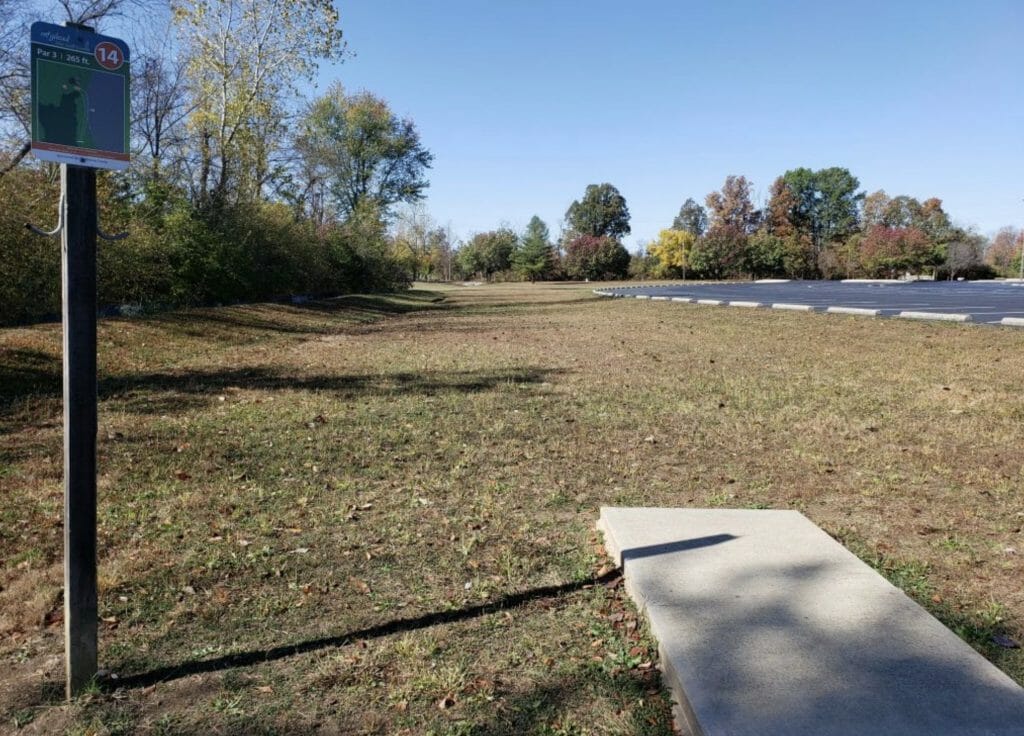 At first glance, finding the biggest danger seems easy – the OB parking lot. The solution for most right-handed players is just to throw a hyzer with a very overstable disc that can’t go right. But that shot can bring the second real danger into play – the nasty hedges on the left side. Taking a very overstable disc means committing to a wide line over the parking lot, and some players have a hard time committing to a line that far out over an OB area. And if you can’t commit to that line or do commit but don’t get enough power on that Firebird or Felon, you may hyzer out and fall short side into the hedge. Depending on your lie in that mess of sticks and thorns, you may be looking at a higher score than if you just sailed OB, took your penalty stroke, and had an open shot from the edge of the parking lot. The hole, as simple as it is, is offering you a clear problem (don’t go right) that has an obvious solution (throw something really overstable) that can bring another problem into play.

But there is a good miss. There is no problem going long. Standing on the tee, your distance number is not 265, it’s 285. Yes, you need to throw something overstable, but maybe a Teebird rather than a Firebird (or, depending on your arm speed, a distance driver.) Going with more distance and slightly less overstability means you don’t have to commit to throwing as far out over the parking lot. The key is to throw something that will clear the hedge line even on a slight miss. If you throw something that should go 285 and you are a little short, you are right on it. A little long, and you still have an edge of circle putt.

Unless a green has serious slope or the wind is a factor, a putt from 25 long is no worse than a putt from 25 feet short, right, or left. If there is danger short, the good miss is long. If there is danger behind the basket, then take a disc that can’t reach it. If you have your distances absolutely dialed, then throw what you know. But if you are at all unsure when choosing a disc for a shot, find the best mistake to make and plan to make any error the good miss.

Sometimes the good miss is based on the wind. If the wind is blowing hard left-to-right, you want your disc to land on the left side of the basket so you can have a downwind putt. In the wind, it is sometimes better to be 30 feet away putting downwind rather than facing an 18-foot headwind putt.

You Can’t Impress the Course

There is a lot of ego in the game. It is natural to want to impress your cardmates – or worse, the course – with your array of shots. Sometimes, you feel that there is only one way to play a hole or that you need to show that you can throw all the shots the course demands. Don’t. If your only dependable drive is a 250-foot straight throw with a mid, then throw that around the course, make your upshots and putts and enjoy finishing around par. This is a competition, not an exhibition.

Don’t feel that you should throw the “right” shot to prove you can play disc golf the “right” way. Be comfortable with seeing every hole as an open-ended challenge and look for a way to play it in a way that gives you the best chance to score. That may mean laying up, playing against a dogleg, or throwing more disc than your cardmates to make sure to clear any dangers. The course may be set up to present you with a particular challenge, but it is always fine to go your own way.